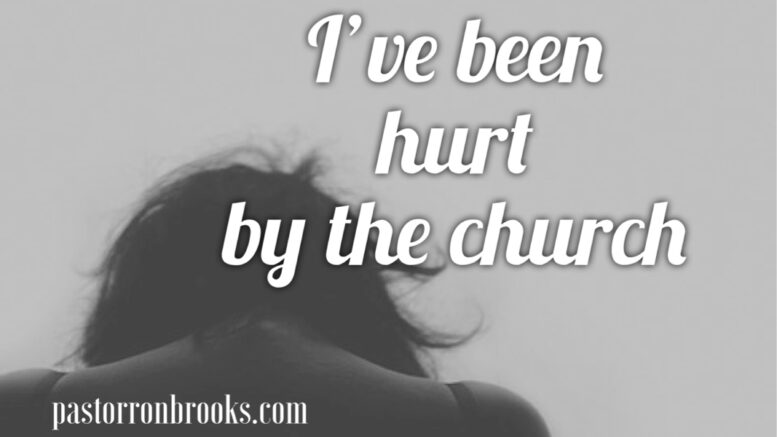 One of the biggest hurts I have experienced came from a time when I was on staff at a church and was transitioning to a similar role in another church. The church I was at had just come through a very rough period. There was a decline in attendance, a new pastor, and a new location. Though things looked different, they were starting to look better.

I was surprised to see an email from a local mega church one day in my inbox.  It seems they found a resume I had posted a year earlier during a time of great turmoil in the church I was serving at. It was a time I was seeking God’s direction, and had sent out resumes in an attempt to discern God’s will.

Even though I had made it through the tough time and things at the church were getting better, I still followed through with meeting the new church, just to see if God was working.  Things went well over the next several meetings to the point the Children’s Director offered me a position, including a salary package and start date.

Through many discussions and prayers, I decided to accept the new position, and I made one of the toughest decisions I have ever faced. I resigned my position as Children’s Pastor.

Rather than experiencing a time of anticipation and excitement, I experienced one of the darkest few days of my life. I received communication from the hiring megachurch letting me know the lead pastor wanted a meeting.  I didn’t not think any part of the process was strange— with a church of 15,000, each department had it’s own entire staff. My communication had always been with the children’s director over the entire children’s ministry. Since it was her department, she staffed the positions the way she wanted to.

I had met with the director multiple times, along with many others from the children’s ministry staff.  I was assured that the meeting with the lead pastor was a formality, and my start date was still set and less than two weeks away.

The meeting with the lead pastor and many other staff members went well from my perspective, however there were issues I was unaware of.

Not long after the meeting I was informed that the lead pastor felt I was not ‘exciting enough’ and did not think I would have the stage presence he thought necessary. None of the meetings with the Children’s Minstry Director or staff mattered. My past experiences did not matter.  All that mattered were his thoughts in that moment.

While I have my own thoughts and opinions of why things happened the way they did, the disappointing and painful facts were he decided I was not to be hired after all.  A major issue I had was I had already resigned! Just like that his decision left me unemployed. He and his staff also did not feel the need for any further communication and they refused to contact me back after repeated attempts.

The only person who would communicate with me was the children’s director who hired me, who changed her story and claimed she never hired me, even though I had everything in writing. Soon after, even she ended communication.

Needless to say, that was a very difficult time for me and my family. Looking back, I still don’t understand why things happened the way they did.

I still don’t have answers to any of my questions, and I have accepted the fact I never will. I do not understand why God allowed me to experience that kind of hurt from the church. But it happened. The best I can do it accept it and try to learn from that experience.

It sometimes still hurts, but the pain is less now, since some time has passed. I am a bit older and wiser now, and I know that God can use painful experiences and turn them into something good. It just may look different than what I expect. It was a definite lesson in trying to see things from God’s perspective rather than my own.

In thinking about being hurt by the church, or family, or close friends, I am reminded of Joseph.  In Genesis, Joseph experiences a world of hurt from those closest to him, his brothers.  Jealousy motivated his brothers to fake his death and sell him into slavery. My experience led to my unemployment. Joseph’s experience landed him in jail. I’m not sure how Joseph made it through, or what he was thinking through his process. I do know the difficulties I faced.

I also see how God used Joseph’s situation for his good. Joseph was not in control at all. He was along for the ride. There was nothing he could do to change his situation. God moved Joseph from slavery to Potiphar’s right hand. He was ultimately responsible for saving his entire family from famine, because God showed him favor in a bad situation.

Being in a better place does not erase what happened. It may ease the pain, but the scars will always be there as a reminder. And there are times that scar gets pushed on and it hurts a little, but it hurts far less now than the open wound I experienced at the time.

A sad truth for me is this was not the only time the church or a pastor has cause hurt. And I am sure it won’t be the last. If I can hang onto the truth in the situation—that God is with me and for me and will take care of me—I think I can make it through next time I am hurt by the church.

What about you?  Have you been hurt by the church? How did you handle it? If you are hurting now, please know that God is still in control. He knows where you are and what you are feeling. He will bring you through in His time. It may not look like what we want and He may not do what we think He should, but He will not turn His back on you.

Your child’s relationship with God must extend beyond Sunday morning. Parents have to take a leading role in the discipleship of their kids. Based on the Fruit of the Spirit, Got Fruit? is an effective tool to help parents disciple their children.
If you are looking for help with your family devotion time, click here– Got Fruit? is for you! Through this devotional you will be guided through discussions that build on each of the 9 fruits of the spirit. Each of the 9 devotionals include bible passages that highlight the highlighted fruit as well as a few related thoughts. Also included is a series of discussion questions that will help you guide your children in a conversation to bring truth and understanding. This short devotional is a perfect tool to guide you as you disciple your children into a deeper relationship and understanding with God.

Does God want you in jail?

God’s will is NOT #kidmin

The Death of a Church