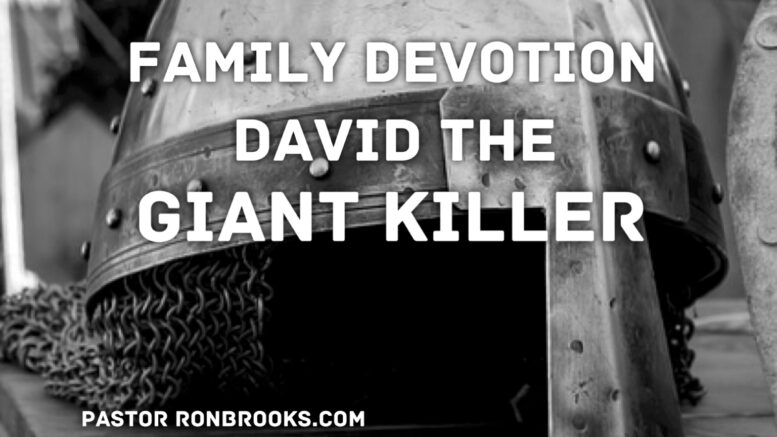 David is a key figure in the Old Testament.  He was a part of Jesus’ family tree.  He killed a bear and a lion and was anointed king, all while he was a boy.  There are several books in the Bible that record his history and he wrote many of the Psalms.  Acts 13:22: “God testified concerning him: ‘I have found David son of Jesse a man after my own heart.”  There is much that we can learn from him and his life.  This is the first in a series that will take a look at several key moments in his life, including his encounter with Goliath, his friendship with Jonathan, and his sin. This series is from FamilyTalk: a guide to family devotions.

Think about it—David was on a mission from his father to bring food to his brothers. His day went from ordinary to extraordinary when Goliath stepped out on that field. Sometimes God’s plans are bigger than our plans, no matter how old we are.

Philippians 4:13 I can do everything through him who gives me strength.

1 Timothy 4:12 Don’t let anyone look down on you because you are young, but set an example for the believers in speech, in life, in love, in faith and in purity. 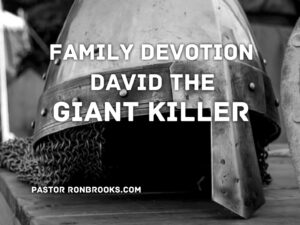 Why was David so confident that God was with him?

Would you have been afraid if you were David?

Why was David going to the battle field?

Why was the army afraid of Goliath?

Do you think David was afraid?

God is with us all the time, we just need to remember that. We may not have giants in the form of big, mean people that we face, but instead we may face giants in the form of a fear, a bully, a bad habit….and the list could go on. The next time you are faced with a ‘giant’ issue, remember David and what he accomplished with God’s help, and ask God to help you face your ‘giant’.

It doesn’t matter how old you are, God can still use you for great things. Remember, He is bigger than any issue we could face, and He is always with us!

If you like this devotion, it is a part of FamilyTalk: a guide to family devotions available on Amazon for only .99. You can also check out The Finding Story, a collection of family devotions from a series based on Finding Nemo.

Your child’s relationship with God must extend beyond Sunday morning. Parents have to take a leading role in the discipleship of their kids. Based on the Fruit of the Spirit, Got Fruit? is an effective tool to help parents disciple their children. If you are
looking for help with your family devotion time, click here– Got Fruit? is for you! Through this devotional you will be guided through discussions that build on each of the 9 fruits of the spirit. Each of the 9 devotionals include bible passages that highlight the highlighted fruit as well as a few related thoughts. Also included is a series of discussion questions that will help you guide your children in a conversation to bring truth and understanding. This short devotional is a perfect tool to guide you as you disciple your children into a deeper relationship and understanding with God.